Ed. note-  Welcome to Nicole Fiss’ new column.  With Hell Hath No Fury, she takes a look at the fairer sex, and how destructive the women of horror can be when they put their dark souls to it.  As Death Ensemble is in the midst of celebrating our crowned prince of Hell with our OMEN retrospective, it’s only fitting that Nicole starts off with a look at hellraiser Clare Higgins.- P.F.

When most people think of horror villains the usual three come to mind, Jason, Freddy and Michael.  But since I’m here to give a female prospective, that’s what you’re going to get.  There aren’t many, but female villains are far more interesting.  While I love the classic slashers and serial killers, female killers tend to be more devious and seductive.  They use their charm, beauty and physical attributes to lure in their victims and then kill them with some of the most original methods I’ve ever seen.

The perfect example is Julia from HELLRAISER.  She begins innocent enough, but as the movie progresses and her desire to regain her former lover intensifies, she becomes the villain.  And what a villain she is.  She transforms, not just mentally but physically.  She gets darker and her overall appearance changes completely.  She goes from a quiet housewife to a stunning evil temptress with every murder she commits.

Juila pale and shaking after the first kill

The incredible Clare Higgins plays Julia with such mesmerizing talent, she is by far my favorite female villain in horror.  She uses her eyes, body, and her impeccable English accent to make Julia absolutely terrifying.  She becomes the epitome of evil, being fueled only by lust.  Her change begins when she brings innocent men to feed to her ex-lover (and ex-brother in law) Frank so he can regenerate himself.  After the first kill she is pale and shaking, almost getting sick and telling Frank she won’t do it again.  By her final kill in the movie, she casually wipes off a bloody hammer with a rag like it’s second nature.

There is one scene in particular that has always captured my attention.  Julia is curled up on the corner of the sofa with her perfectly manicured hands wrapped around a glass, and a devilish grin slowly appears on her face.   It’s an amazing screen shot and it shows her for the evil and sadistic woman she has become.

A barbed wire beauty from the gates of Hell

She continues her compelling reign of terror in the sequel, her character really comes to life.  She is reborn through the mattress that she died on in the first HELLRAISER, and with the help of a brain surgeon she becomes whole again.  The body count quickly increases as Kirsty and Tiffany fight to keep her in hell.  It is a whirlwind of cenobites, body parts, loose skin and the good doctor becoming less than human thanks to Julia’s efforts.

Although HELLBOUND: HELLRAISER II movie is 24 years old, it still sends chills up my spine when I hear her say those words,  “Why do you think I was allowed to come back?  It wanted souls, and I brought you.  And you wanted to know.  Now you know.” 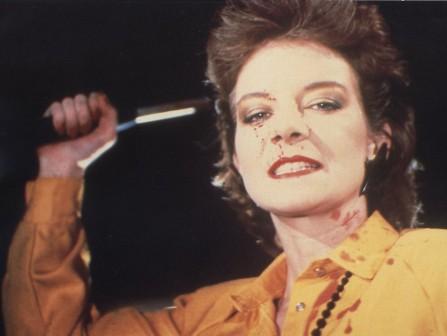 I cannot emphasize how well Clare Higgins plays this part.  Julia is an evil, sadistic, black widow of sorts, and it amazes me how the sweet and kind Clare Higgins can make such a 180 turn and become this villain.  She truly is one of the great actresses in horror.

This entry was posted in In the Abyss and tagged Clare Higgins, Hell Hath No Fury, Hellbound Hellraiser II, Hellraiser. Bookmark the permalink.

One Response to Hell Hath No Fury: Clare Higgins