A different kind of Hell

Ed. note- Here’s a review I wrote a long while back for Icons of Fright. It focuses more on the DVD extras than the film itself.  I’ll explore Pinhead himself and the first film more in-depth sometime down the line.  If you dig HELLRAISER, make sure to check out Nicole Fiss’ look at actress Clare Higgins.- P.F.

In the pantheon of movie maniacs, the top tier is dominated by Leatherface, Michael, Jason and Freddy.  Cresting the rim of the second tier is Hell’s minion himself, Clive Barker’s creation, Pinhead.  He earned this reputation on the strength of the first HELLRAISER movie, a superbly crafted horror film that stands out because of its bold originality and its methodical villains.

Hellraiser is the twisted tale of a twisted family.  Travelling a world that has run out of perverted pleasures for him, Frank Cotton purchases a puzzle box that, once he opens it, releases the Cenobites, fetishist angels of darkness.  When his brother Larry and new wife Julia arrive at Frank’s old house, a moving man accidentally spills blood and awakens Frank.  As the adulterous Julia attempts to get him new flesh, the Cenobites come calling for the escaped Frank.

Put plainly, HELLRAISER is excellent.  All the pieces fall together perfectly, with its offsetting score, stark scenery and brilliant lighting, and cast of monsters both human and otherworldly  Even if Andrew Robinson is a little flat as Larry, or Ashley Laurence a bit raw as his daughter Kirsty, Doug Bradley’s performance as the Lead Cenobite we would come to know as Pinhead is powerful and, in a dark way, charming.

The Cenobites Angels to some, demons to others

The rest of the Cenobites are a rogue’s gallery of fetishistic fright, as the creatures define the film and differentiate it from so many horror movies.  The film transcends the genre, taking it to bold new places into which horror rarely forays, and we have Barker to thank for it.  HELLRAISER is the perfect example of one man bringing his vision to the screen.  The movie is a direct translation straight from Barker’s dark, twisted imagination,  as if the movie projected itself right out of Barker’s id.  This is probably the most artistic horror film I’ve ever seen, paired with guttural images that shock and disturb.  Barker’s ability to balance the two is impressive.

The box. Open it and they’ll come.

The new HELLRAISER disc has a multitude of extras, many of which carry over from Anchor Bay’s previous release of the film.  I’ll cover them separately below:

Repeat:  A commentary by Clive Barker and Ashley Laurence, moderated by Peter Atkins, acts as a love letter from Barker to his fans.  15 years removed from the film, Barker is honest with his doubts as a first time director, and the discussion seems to take him back to a very happy time.  Atkins does a great job in keeping the conversation flowing.  Laurence, however, is silent for much of it, but I think that’s because she understands that this is really Barker’s film.

Repeat:  “HELLRAISER:  Resurrection.”  This 24-minute documentary begins and ends with Doug Bradley reading from Barker’s novella The Hellbound Heart, over scenes from the movie.  Clive Barker then claims that this is the last he’ll ever talk about HELLRAISER.  Thankfully he provides some quality insight, as do Ashley Laurence, Doug Bradley and several others.  This documentary is entertaining and informative, well worth a watch.

Repeat:  The stills gallery and trailers.

New:  “Mr. Cotton, I Presume?”  During this 16 minute interview, Andrew Robinson discusses his parts in DIRTY HARRY, HELLRAISER, and his subsequent reason for not appearing in HELLRAISER II.  He’s happy with this film.  Worth a watch. 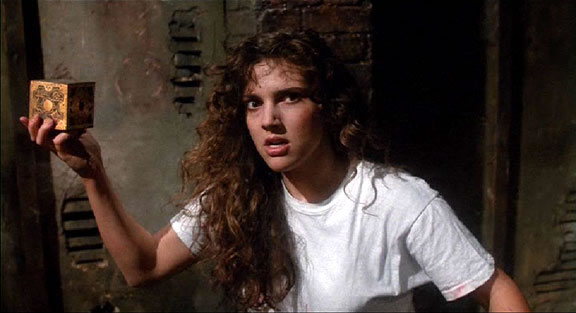 Ashley Laurence as Kirsty ready to fight back

New:  “Actress from Hell.”  Bear through the ridiculous first minute of this 12 minute interview, and then Ashley Laurence provides some interesting information on how she got hired for the movie, and what it means to her.  Most interesting is her discussion of Kirsty’s appearances in other films from the franchise, which don’t please her nearly as much as the original.

New:  “Hellcomposer.”  Christopher Young rambles on for 18 minutes about the score.

Be aware:  For some reason, the volume is incredibly low on these  three interviews.

New:  “Under the Skin.”  Doug Bradley discusses his relationship with Barker, and about the perils of working under extensive makeup.  It’s always a pleasure to listen to Bradley, because he’s intelligent and dignified, and has a great voice.

New:  TV spots, trailers and  a DVD-ROM of the script round out the package.

The question with a re-release is always “Do I buy it if I already have the earlier version?”  In this case, no.  Unless you’re a completist, four new interviews are unlikely to add much for you.  If, however, you’ve never owned HELLRAISER, this is the definitive version, the only one you should buy.

So why, based on this superior movie, isn’t Pinhead in the top tier with the other maniacs, considering his first film is better than most of their catalogues?  I think this has everything to do with his greatest strength being also his greatest weakness.  Unlike the others, he’s refined and well-spoken, a literate gentleman who also happens to be a monster.  He’s too classy for most horror fans.  This is a crime, and I’d hope that when future generations look upon the pantheon, they’ll reorder it and put Pinhead in the top tier.