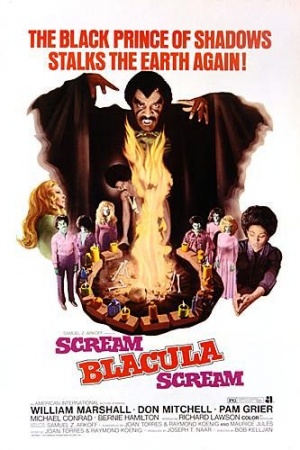 Pam Grier is coming to this October’s Chiller Theatre!  The blaxploitation side of Phil rears its badass head as he reviews her SCREAM BLACULA SCREAM.

Sequels are hard.  The through line is that a good one has to come up with a fresh scenario, so it doesn’t retread so much of the previous effort as to be old hat;  but it also has to satisfy the fans of the last film by plumbing what worked and yielding more of it.  Serving these two masters and finding these proper balance between the two must seem an impossibility to most directors when they attempt to tackle a sequel.  Veer too hard the one direction, and you have the first few FRIDAY THE 13TH sequels, slavishly adhering to formula;  too hard in the other, and you’ve got Wes Craven’s THE HILLS HAVE EYES 2, with dirtbikes and dogs dreaming flashbacks.  So I don’t envy Joan Torres and Raymond Koenig for having to sit down and write the script for SCREAM BLACULA SCREAM, the follow-up to their very effective blaxploitation chiller BLACULA.  Despite the return of William Marshall, the addition of soul sista Pam Grier and the potential of a new twist via voodoo, this is a decent horror flick but a poor sequel.

SCREAM BLACULA SCREAM begins at a funeral of a voodoo high priestess.  Her death has led to a power play by superbly coiffed Willis, who believes he’s entitled to take the reins of the cult.  But the cult members sharply disagree, reminding him they have the power of the vote.  Problem is, they favor the more meek, almost reluctant Lisa Fortier to the loud outfit and even louder spouting mouth of Willis.  His play thwarted, Willis seeks out an old voodoo man, who gives him some old bones and some instructions.  Back at the old mansion he’s watching for a friend, Willis does some hoogabala and unwittingly resurrects Prince Mamuwalde, Blacula himself!  The vampire goes about doing his soulful bloodsucking thing, and terror ensues in the streets.

One of Blacula's many minions

As I’d seen the original many times as a kid, the sequel had a lot to live up to.  Much of the flick plays like carryover from the first film:  Blacula establishes himself to characters in a social setting, then returns later to attack a minor character;  Lisa’s boyfriend Justin, a former cop, figures out what he’s facing in the second act;  there’s a big fight between lots of cops and vampire minions toward the end.  Most of it’s satisfying, though the faceoff between Justin and Mamuwalde and their ensuing discussion about vampires is a downright ripoff from the original.  The problem is, BLACULA’s story was much more compact, and it moved.  This one stretches itself out in too many directions, and leaves loose ends (just look at Willis, who starts off as a major character, then quickly slides into the background).  Given the same people wrote the screenplay, I’m surprised it’s not as taut as their previous effort.

The voodoo angle should have invigorated the film, but fails because the script doesn’t really do anything with it.  Instead of the Anglo-Christian take on nosferatus, a voodoo approach to taking out a vampire prince would have been fresh.  Using Grier as a newly anointed high priestess doing battle with a creature of the night, with the city of L.A. at stake, would have bolstered this flick and made it revolutionary in the rather staid lore of vampires.  Sadly, the film explores none of this.  Wasting the opportunity to do something bold, the script has Mamuwalde elicit Lisa and her voodoo powers to exorcise his demonic soul and return him to everlasting peace.  I understand the tortured vampire bit as well as anybody, but this swerve doesn’t do anything to build dramatic tension.  In fact, even though it does provide reason for an awesome Mamuwalde voodoo doll, it keeps Blacula out of the action during most of the final act, sweating instead of biting.

The film also wastes the black awesomeness of Pam Grier.  Two killer mistakes:  Lisa is meek;  and Lisa is never naked.  Blaxploitation fans love Grier for her sassy characters such as Coffy and Foxy Brown, and for her fine body.  Much like Tina in the first film, Lisa is too reticent to take action for the majority of this one, even when a vampire attacks her in a funeral parlor.  Foxy would have spun that vampire around and kicked it right in the ass.  Foxy also would have also taken a shower or engaged in steamy lovemaking at some point, thus fulfilling blaxploitation law that Pam Grier must appear topless in any of her genre appearances.  SCREAM BLACULA SCREAM is a PG rated effort, and it breaks that law.    For those of you who complain about all the PG-13 PROM NIGHT remakes of the world, you don’t even know the half of it.  I would have preferred a bolder Grier who got naked.  Which leads me to question why Grier is even in this film, as there were probably scores of black actresses who would have sufficed.

Grier confused as to why she's not topless in this film

The best part of the film is William Marshall’s performance as Blacula.  As I mentioned in my review of BLACULA, he managed to be simultaneously regal and badass as he prowled the streets of L.A.  Here, Mamuwalde picks up right where he left off.  The script wisely doesn’t change the character much.  He’s still the noble gentleman who has an appreciation for the finer things in life, and won’t be sleighted by the riffraff of the contemporary error.  One thing I noticed on my recent screening is that he’s angrier this time.  I get the feeling he’s got more rage, however subdued under his nobility, because he didn’t want to come back.  It’s a slight character development that Marshall brings to the table, one a lesser actor wouldn’t have brought.

How sad that the film doesn’t even give a noble character played by an impressive actor a decent sendoff.  BLACULA had him burned by the sun, worms crawling out of his centuries old skull;  here, the film freezes on him mid-scream and goes black,  his tortured face frozen in red as the credits come.  This was cinema’s last, indelible image of Blacula, as nobody ever made a third one.  The character had clearly run his course after one film, resurrected for a second that has some decent scares but doesn’t reach too far.  It adheres enough to its predecessor to satisfy just enough, but doesn’t touch the potential of voodoo and Pam Grier to rise above the ranks of a solidly decent sequel.  In his final act, Mamuwalde deserved better.