Enough talk about vampire flicks that aren’t even horror movies.  Phil reviews a film with a very evil vampire, the master Barlow, in SALEM’S LOT.  The mini-series scared him as a kid when it was first on, and it still gives him the chills today.

Every horror fan has one particular monster movie that sold him on the genre.  It’s usually a film he saw when he was very young, one that terrified him and kept him up long after Mom had put him to bed in his pajamas.  One movie that taught him how good it was to be scared.  For me, this film is the 1979 adaptation of Stephen King’s novel, SALEM’S LOT.

The film was originally intended for a theatrical run, and George Romero was supposed to direct (in fact, Romero acknowledges this in DAY OF THE DEAD, as Bub is reading the novel).  Once the studio decided to shift it to TV, Romero knew he could never make the gory version he’d envisioned.  Warner Bros. then turned to another goremeister, TEXAS CHAINSAW MASSACRE’s Tobe Hooper.  With King’s novel as his source, Hooper crafted an atmospheric chiller which scared me to the bone when I was 7 years old, and confirmed that I was a horror fan for life.  And it still scares me now.

The movie starts in a small church in Guatemala.  We meet a grizzled Ben Mears and his young charge, Mark Petrie.  As they fill bottles with holy water, one lights up.  When Mears says, “They found us again,” the audience doesn’t know what’s found them, but it certainly must be something frightening.  Flash back two years, to the quiet little town of Salem’s Lot, ME.  Newly widowed Mears has returned home after a long absence to write a book about the Marsten House, an ominous structure that stands on a hill, overlooking the Lot.  But Mears is not the only new arrival in the town.  Antique dealers Richard Straker and Kurt Barlow have set up shop in town, and purchased the old dark house.  When people start to disappear and die in rapid fashion, the quaint community falls under a dark cloud, casting Barlow and Straker in conflict with Mears for the very soul of the town.

Mears ready to test his faith

Conceptually SALEM’S LOT has an interesting premise.  A vampire travels with his human familiar the world round, moving into small, unnoticed towns and feeding until he clears each little hamlet out.  The movie suggests that Barlow has done this for hundreds, perhaps thousands of years.  Thus, the movie stacks the deck against Mears;  can the brooding author stand a chance against an evil that has survived for so long?  Can he succeed where so many others surely have failed?

I also like the concept of the house with a history.  The Marsten House is a powerful force, looking down on the town from its perch.  It draws evil men, and is itself as evil as Barlow.  The house is a great example of how a setting can become a character, in that it has its own character and moves toward defeating Mears.

From these simple concepts, Hooper and screenwriter Paul Monash craft a rather effective chiller.  The script compresses several characters (in the novel, King creates a whole town’s worth of 40 or so), and alters some events that actually work better than they did in the novel (it’s much better to see Barlow and Mears have their final confrontation set in the Marsten House, which plays so prominently in both print and film).  Hooper shows great restraint and craft here; unlike his seminal chainsaw flick, this movie is highly stylized.  In fact, for a TV production, SALEM’S LOT boasts lots of artistic shots, such as the opening credit sequence.  As Mears holds the bottle of holy water in the opening scene, it glows blue.  The light then fades to a still shot of the moon, followed by the reveal of the Marsten house;  midway through the credits, the moon fades out as sunlight brings day to the town and the foreboding house.  A few scenes later, as Mears stares up at the empty house in darkness, he turns and finds himself confronted by Straker.  A cut to Mears reveals his shock, and then the camera  swings through the air, creating a continuous shot that catches Straker’s look of disdain.

Perhaps even more so than the visuals, the score lends an ominous touch to the film.  Watching this film when I was young, for the first time I learned just how much the music can make or break a horror film.  Driving and loud at points, ethereal and airy at others, the track is downright foreboding throughout. 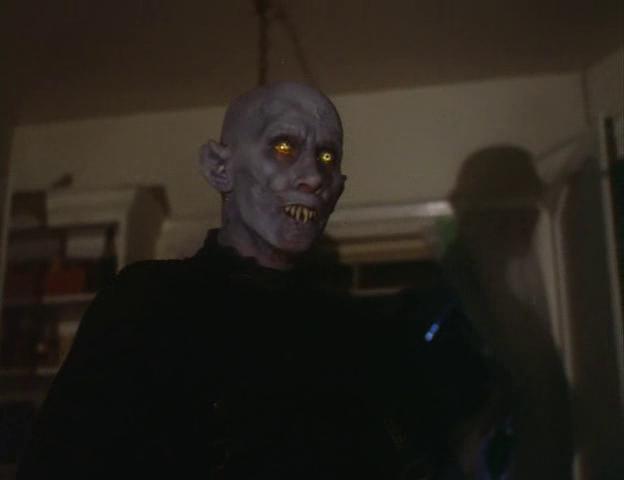 The master threatens the Lot

But what really terrified me most with this film as a child, and still does each time I watch it, were the scenes with the vampires.  These are some genuinely terrifying bloodsuckers.  One boy appears at his brother’s window and floats in, all yellow eyes and white fangs.  When grave digger Mike Ryerson and a friend transport a box that moves on its own in the truck, tension is through the roof.  Later, Ryerson jumps into the open grave of a victim, to dreadful consequence (leaving me to this day questioning this rather fatal move).

But most frightening of all is Barlow himself.  He isn’t revealed until the film is more than half over, but when he finally arrives for a handful of scenes, the effect is powerful.  His battle with a priest over Mark’s life is an impressive showdown between dark faith and light.  Though many critics knock the way his look throws back to Count Orlock of NOSFERATU fame, he’s certainly more frightening than had he looked like a normal guy with fangs (as the novel sells him).

In short, SALEM’S LOT holds up for me.  But will SALEM’S LOT frighten today’s audiences?  Probably not.  That’s not a knock on the film itself.  It’s just that horror fans nowadays, who’ve grown up on fast food horror franchises with MTV editing, are unlikely to sit through a three hour long vampire story that’s light on blood and takes its time in setting up characters and plot points.  When I showed it to a class of high school seniors a number of years ago, they laughed at the payoff scenes.  In a world that’s survived both torture porn and Marilyn Manson, shock holds sway over old fashioned horror.  That’s a shame, as this really is a well made horror flick.

Unfortunately, Warner Bros. does not have the same reverence for SALEM’S LOT that I do.  A long trailer for the film is the only extra;  as the film had a theatrical run in Europe, I think this trailer actually ran in theatres overseas.  Much like the movie, it starts slow but builds to an intense finish, and it uses the film’s music to great effect.  There are English and French subtitles for the hard of hearing, and… well, the French.  One oddity occurs on the disc:  the scene selection is bunched into six chapters each.  So you can select Chapter 1, 7, 13 and so on.  As this disc came out not long after the DVD format arrived, I’m not sure if this happened because Warner Bros. was new to the game or just apathetic about the movie.  Either way, SALEM’S LOT deserves better than this bare bones effort.

SALEM’S LOT still ranks among my favorite horror flicks, and that’s not just out of a sense of nostalgia.  It’s got some real scares and just the right atmosphere for a horror movie.  It may not be for all tastes, but I highly recommend it at 39 years old, just as I would have at 7.