Ed. note- The Christmas season is officially upon us.  As you digest your turkey dinner and Black Friday passes, and you prepare for Rudolph and the other reindeer to arrive, here’s a much darker tale of another deer.  This one involves a wrecked car that still runs, a slew of zombies right outside of zombie capital Pittsburgh, PA, a full moon, and a guy who was so afraid to fly, he convinced himself it would be quicker to drive from Long Island to Monroeville.  As for the convention itself, I was left most unimpressed.  With a great lineup, HH Pittsburgh should have been a lot more fun than it was.  Looking back, it’s one interesting story for the weekend.  Or as I like to call it… Beware the Deer, David.- P.F.

When we first discussed going to the HorrorHound weekend in Monroeville, Pennsylvania, my buddy X suggested we drive.  I had serious trepidations about this;  The Pittsburgh area is a 7+ hour jaunt from where I live on Long Island, so I saw no need to drive when we could fly and rent a car.  But X is afraid to fly, and  bent over backward to present reasons (however illogical) why driving would be cheaper and, believe it or not, quicker.  I tried to fight him on this, but he wouldn’t budge.  So I begrudgingly acquiesced, and off to Monroeville we went in X’s uncle’s car.  Little did either of us know that, under the full moon, there’d be trouble just over the horizon on Rte. 80.

It was about 9:30 at night and we were cruising along at about 80 mph.  The trip had gone smoothly so far.  X was behind the wheel, and we were in the middle of a conversation.  And then it hit.  Out of nowhere a deer crossed our path.  There was no time to swerve.  No 10 or 15 feet between us and the deer.  It and the car occupied the same space at exactly the same time.  In the thousandth of a second before its forward momentum carried it to the left and off the road, I had a single thought:  that deer’s thigh is coming right through the windshield and decapitate me.  But God was with us.  The deer flopped off the road instead of into my chin.  And this is the weird part.  The hood was crumpled, parts of the fender smashed.  But the car still ran.  I drove it for another 150 miles to Monroeville, and it made it all the way back to X’s house in Selden.

X and I took this series of events to heart quite differently.  I counted my blessings that the car and both of us survived;  X was overrun with guilt and depression.  The deer shaded the rest of our trip, as the adventure became a major downer from the moment we hit it til X dropped me off at my house 2 days later.

But there was still a convention to attend on Friday.  Though it was probably the most clichéd way to start the day, I have to say it:  I was jazzed that X and I were going to the Monroeville Mall.  Though DAWN OF THE DEAD isn’t one of my favorite zombie flicks, how could any fan of the undead worth his salt not want to visit this iconic site?  Unfortunately, an immediate problem was apparent as soon as we hit the parking lot.

The rather indistinct Monroeville Mall

As 30 years is a long time, whoever owns the mall has totally modernized it.  Oh sure, walking past the escalators or imagining Peter and Roger plucking off the undead with high powered rifles was cool, but if I had taken the trip blindfolded, I would not have been able to identify the Monroeville Mall from any other in America.  I had suspected that there would be signs all over, marketing the heck out of it, reading “The Filming Location of George A. Romero’s DAWN OF THE DEAD!”  But only one store, which sold all kinds of horror figures, acknowledged the film at all.  All in all, I was severely let down.

Me and HKZ, Mike Christopher

When we got to the con, I quickly realized the mall would be only the first disappointment of the day.  But the next let down surely fell in the laps of the con’s promoters.  On paper, this looked like an awesome show.  A reunion of the AMERICAN WEREWOLF IN LONDON stars headlined the event, with John Landis and David Naughton, alongside Griffin Dunne making his first ever con appearance.  Coupled with a decent showing of zombies from DAWN, a few Italian zombie stars and the inaugural show for frequent Romero actor John Amplas, how could this convention go wrong?  This show seemed tailor made for throngs of fans hungry for autographs from the people involved in two very popular, seminal  horror flicks. Imagine my surprise when less than a hundred fans attended on Friday night.  This was hands down the worst turn out for a major convention that I’ve ever witnessed, and it showed.  Boredom and loneliness set in for many of the guests;  some of the zombies carried on conversations with me long beyond the point I felt it necessary to converse.  They weren’t the only ones who were bored, though.  With a weak dealer’s room (X sagely noted that if you wanted a t-shirt or a DVD, you were fine, but anything else and you were out of luck), and only so many people I wanted to sign stuff, excitement ran low early.  With little to do, we stayed til 8, but I really could’ve finished all my business in less than an hour.  Even by noon on Saturday, which is the boom day for every con I’ve ever attended, this con showed less life than a machete zombie.

I can’t blame HorrorHound for low attendance.  I can, however, take them to task for the AMERICAN WEREWOLF situation.  Though their website did not indicate so, Landis, Naughton and Dunne were not appearing to sign on Friday night.  So anybody who showed up on Friday only had every reason to be angry.  (Fortunately for those AWIL fans who arrived at the con on Saturday morning, Landis and company had a line of maybe 30 people; a fan told me the con had sold a total of about 20 expensive VIP passes for the entire show.)

When we met the three, at least they were all effusively happy, though Dunne seemed a little uncomfortable with signing autographs.  Though X was in low spirits, to the point of being almost silent at times, his smile in the picture of him and Griffin Dunne proves he at least got a little joy out of the show.  A smattering of other guests were no-shows (or showed up after I left on Saturday afternoon, as the promoter would later inform me; still a bum deal).   As my own story with the deer should signify, people travel long distances and pay lots of money to attend these events;  conventions really owe it to the fans to update their websites. There were a few positives.  The guest list was off beat, and more than a little enticing.  Because of the low fan volume, I didn’t have to wait long for any of the guests, including Amplas.  He was the highlight of the show, and I was the very first person he’d ever signed “I got my cake!” for, a distinct privilege.  I also got a great black-and-white of him from MARTIN.  Greg Nicotero signed a picture of his decapitated, wired head from DAY OF THE DEAD.  Hari Krishna zombie Mike Christopher had good 8x10s, and wasn’t painted blue as he does sometimes.

Me and Background Zombie Frank Serao

I even got to meet Background zombie Frank Serao, he of the “blink and you missed me” variety in DAWN OF THE DEAD.  It was also my first time meeting Ottaviano Dell’Acqua, the poster zombie from Lucio Fulci’s ZOMBIE.  And it marked my last time meeting Danielle Harris, as I realized she was just shy of doing signings at my local Dunkin Donuts, she does so many. 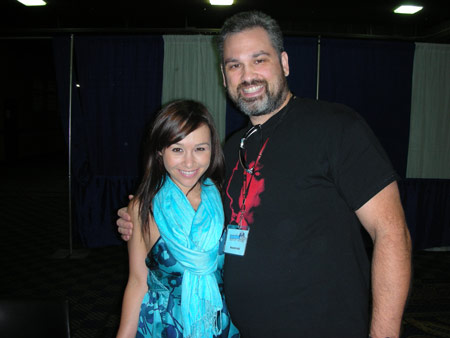 My last pic with Danielle Harris... certainly not my last DH sighting

Most of the celebs were friendly and appreciative.  (With the exception of one disgruntled special makeup artist;  he ruined the CREEPSHOW 8×10 that X made up specifically for Daniel Ferrucci, the film’s Fluffy).  If not for their kindness and the unique blend, this trip would have been a total bust.  A shame, given its potential.

We didn’t stay for the midnight showing of DAWN OF THE DEAD at the mall, because we had another convention to attend.  A mere 36 miles away from Monroeville lies Butler, PA, this year’s home for Monster Bash.  Last year’s show was the focus of the very first piece I ever wrote for Icons of Fright, so I looked forward to this year’s show.  Unfortunately, this con was fraught with problems.  First off, Butler is in the middle of nowhere.  We had to drive 17 or so miles on a local street to get to the show;  when we arrived, we realized we were in the parking lot of a Day’s Inn.  Not exactly an upscale location.

And not a good layout for a con either.  The motel was a labyrinthine mess of hallways, each of which were crowded with tables.  Even with the small turnout, it took forever to navigate the halls.  What should have taken me 15 minutes (I was only there for two guests) took nearly 40 between the glutted passageways and 2 fans who took forever to finish their business in front of me.  I wanted to feed these guys to the giant Audrey II on display, but alas, I did not.  The only good thing about this con was that I got Chilly Billy Cardile to sign my NOTLD banner, and I finally got an autograph from the king of the giant monster cheapies himself, Bert I. Gordon.

I don’t know if my weekend in Pittsburgh would have been any better had we not hit the deer.  Certainly, both conventions had their problems unrelated to our collision with wildlife.  But I have a feeling that I’ll always look back on this as a bad trip, no matter what happened at the cons.  Perhaps I’ll have a better perspective on HorrorHound Weekend in Indianapolis when I go in August.  After all, I’m flying there.