Over the last year plus, I’ve said just about everything I could possibly say about George Romero.  If you’ve read my stuff, you know that he’s my favorite horror director, and one of the main influences on myself as a horror writer, and on Death Ensemble as a website.

When George’s birthday came around last month, I decided it was high time I take a look at every film the man had ever directed.  From NIGHT OF THE LIVING DEAD through SURVIVAL OF THE DEAD, I wrote reviews for each film, but they weren’t really reviews.  They were love letters to a legend’s film catalogue.  I had intended to have them all done by end of February, but I wanted to give LAND OF THE DEAD the love it deserved.  It’s Romero’s last great film, and I have a sinking feeling in my heart that it will stand as the last great film he ever directs.

Below,  you can click on the title of each film to access the the reviews of every film in George A. Romero’s catalogue.  Let them speak for me on the greatness of a maverick and his films.

NIGHT OF THE LIVING DEAD

Romero’s first and still his best.  He created the modern zombie.

Romero’s worst.  Even a gorgeous Judith Ridley can’t save it.

SEASON OF THE WITCH

DAWN OF THE DEAD

Romero’s most popular film. A worthy successor to NOTLD.

An interesting turn away from horror that failed.

Romero and King take on the horror anthology with love and glee.

DAY OF THE DEAD 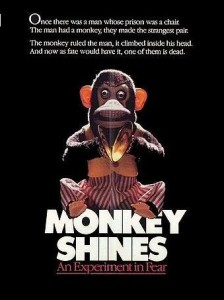 A step into studio filmmaking, and away from what made him great.

Romero should have made “Masque of the Red Death.”

A reunion  with King, and a nice return to form.

LAND OF THE DEAD

Romero’s last great film.  A beautiful companion to the three that preceded it.

DIARY OF THE DEAD

Romero comments on the Myspace generation, but knows little about it.

SURVIVAL OF THE DEAD

Is this the end?  Perhaps it’s for the best.

Harlots of Hell: Our Friends